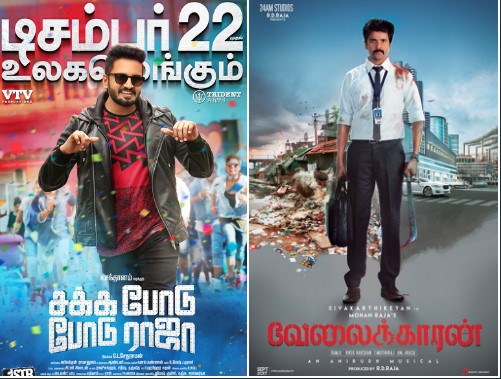 Santhanam is a popular comedian, loved among the audience for his witty dialogue delivery and spontaneity. He made his debut on the small screen and from then on, there has been no looking back for the actor. He became the obvious choice for humor quotient in movies and comedy seemed to come naturally to him.

Another actor that made his way up in movies from the small screen is Sivakarthikeyan. He started his career as a dancer and a stand-up comedian and later became a host. He went on to make his acting debut in 2012 in supporting roles. Soon, he was starring in the lead role in films and even gained a massive fan following.

Incidentally, both these actors made their small screen debut from the same TV channel and have risen to the top from there.

Santhanam is all set to make his debut as a hero with his latest Saka Podu Podu Raja, releasing on December 22. Sivakarthikeyan’s big-budget film—Velaikkaran – is also releasing on the same day.

Having come from the same playground, it will be interesting to see the two movies clash at the box office. Check out the teasers for both films here:

When Aruvi was offered to Nayanthara, Samantha and Shruti Haasan…
Chennai Rain, next spell of rain from Tuesday
Comment