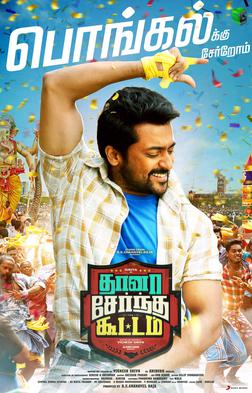 Suriya and KV Anand have been one of those popular ‘hit- combos’ of Kollywood. The duo has previously worked on films Ayan and Maattrraan, both of which proved successful at the box office. Accordin to multiple news reports, the duo is teaming up again to work on a new film and that the film is likely to be financed by AGS Entertainment.

Fans have shown their enthusiasm on social media. One even requested the director to make an official statement soon to which the director responded with a smiley. Initially, there were rumours, suggesting that the movie would be a sequel to Ayan. However, KV Anand has clearly denied such claims, saying that he ‘wasn’t keen on making sequels’ and that his next project is ‘not Ayan 2’.

Anand’s last movie was Kavan, starring Vijay Sethupathi in the lead, which was of a similar theme as Ko, another KV Anand venture.

Meanwhile, Suriya is awaiting the release of his latest Thaana Serndha Koottam, following which he is expected to start working on a film with Selvaraghavan. The coming year surely looks interesting for Suriya.

If the success of their previous movies is anything to go by, we can be sure that this time too, the pair will win our hearts.