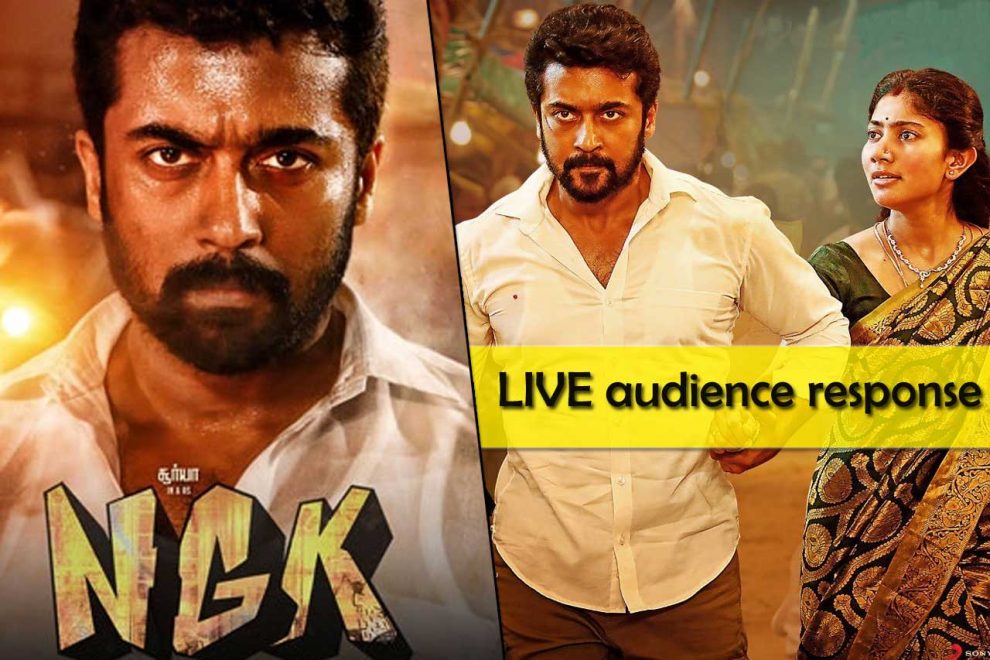 Actor Suriya’s much anticipated political thriller ‘NGK’ which released earlier today is receiving a lot of love and warmth from the audience. Starring Suriya, Sai Pallavi and Rakul Preet in lead roles, NGK is directed by Selvaraghavan.

Ever since the project was announced, every bit of it’s publicity material was celebrated. With all the early morning shows booked houseful, the movie’s release itself felt like a celebration.

Going by the reviews on social media, the audience seems to be impressed with Suriya’s performance in the film.

Here, we bring you the audience’ response to ‘NGK’ online

First half of #NGK seems little dragging, slowly moves into the story. #Suriya has done his perfection. It’s a usual story line of the one who does to try entering into the political status. Hopefully the second half is better and the story keeps us engaged. #NGKreview #NGKFire

#NGK 1st half – #NadippinNayagan sits perfectly on @Suriya_offl . He’s a delight to watch; screen presence👌👌 Nicely integrated parts for @Rakulpreet , Ilavarasu, Bala Singh in the political part of the film..@Sai_Pallavi92
is seen in the family scenes, and gets her moments too.

#NGK 2nd half -There are @Suriya_offl’s #NGKFire moments such as #Pothachaalum, a fiery stunt sequence & a long stage monologue sequence. He plays the flawed, inconsistent, eccentric #NGK character so well👌 Hope the team edits out the #AnbaePeranbae song sequence. It sticks out

#NGK – My rating 3/5.. One of @Suriya_offl’s career best performances is the biggest selling point of the film.
@thisisysr does his part too in this raw political drama..Director – Writer @selvaraghavan’s work flourishes in parts!
#NGK – Despite a forced romance track & the needless #AnbaePeranbae song, @Rakulpreet shines as the smart political analyst Vanathi. Kudos to her Tamil lip sync; professional 👍..

#NGK : A Political film.. How an Educated youth enters politics and plays the game which experienced politicians understand.. @Suriya_offl is top notch.. He is the saving grace.. @Sai_Pallavi92 has done her role well.. @Rakulpreet is apt as the Political consultant..

Political films hardly come by. @selvaraghavan manages to set an arch both to d protagonist n d film. Overall pacing n d closure is a problem, but this fuss free film adheres to d grey area more than d regular. The take on popular opinion is what that makes #ngk special