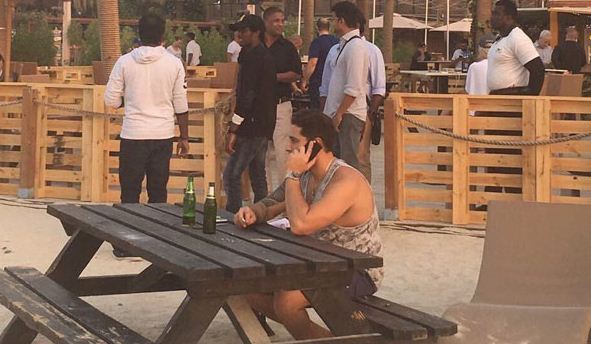 Thalapathy Vijay and director Atlee have taken break from their busy timetables to celebrate the success of their super hit Mersal, in Dubai. The two were spotted hanging out together in Dubai.

Mersal, directed by Atlee and featuring Vijay, was a blockbuster.

After breaking several records, Vijay’s Mersal released on Diwali is aiming to set a new benchmark at the worldwide box office. With the release of its Telugu version, Adirindi, the industry is now looking forward to see whether it will reach Rs 250-crore.

Only four South Indian movies have grossed Rs 250-crore. Superstar Rajinikanth’s Enthiran was the first movie to register its name in the club and it was followed by Baahubali 1, Kabali and Baahubali 2.

Now, the industry is hoping that Mersal would become the fifth South Indian movie to enter Rs 250-crore club. So far, Mersal has collected over Rs 235 crore. The collection of the Tamil version has slowed down across the globe. However, the Telugu version, which was released recently, has opened to a good response.

Controversies over certain dialogues involving the Goods and Services Tax (GST) and Digital India has won the film more audience. The film was composed by A.R. Rahman.

The gossip is that actor Vijay and director Atlee would come together for a movie again, in 2018.