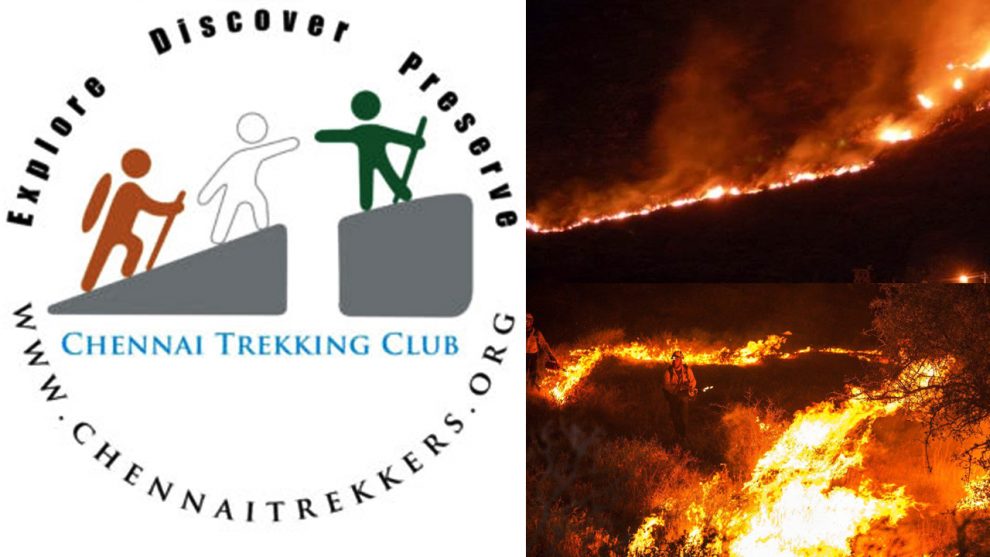 On Sunday, a group of 36 trekkers was caught in a wild forest fire in Kurangani Hills in Theni district, Tamil Nadu. While 9 people were confirmed dead on Monday morning, the death toll rose to 11 on Tuesday.

Among those rescued, 6 people are seriously injured and many others have sustained burns. The victims are undergoing treatment at different hospitals in the State, and doctors are battling to save their lives.

While the mishap has sent shockwaves across the country, with several speculations and debates on media, Chennai Trekking Club, members of which were also trapped in the forest fire, have released an official statement on the tragic incident.

Chennai
Our sincere condolences go out to the families of the victims who lost their lives in the forest fire during our Woman’s Day trek at Kurangani, Theni district. Our experienced trek organisers Nisha and Dhivya, supported by Arun and Vibin, two of our experienced organisers took out a 27 member group for a 2-day trek along with a local guide. We came to know that on Saturday, March 10th the group started off from Kurangani at the base and paid fees at the forest entry check-post who issued an entry pass. The trekking route from the base at Kurangani to Kollukumalai on top is a regular and a clear trail created by local villagers and trekkers. On Saturday morning when the group started to trek, there was no sign of fire in the entire forest range and by evening the team reached the Kollukumalai tea estate at the top and camped there.

On Sunday morning the group started their descent back towards the exit through the same trail they went up by and reached close to mid-point of the exit. As a normal seasonal cultivation practice, local farmers at the base burn grass during this season and on Sunday it seems they light the grass at the base. Due to an unusual low depression in the Bodi valley (Source: Tamilnadu Weatherman), there were unexpected and unprecedented strong winds on Sunday. As a result, the fire swept across from the base of the hills and spread across the hill upwards. Some of the survivors told that there was very limited reaction time due to the fast spreading smoke. As soon as smoke was noticed the team proceeded downhill away from the smoke but got blocked by fire in the opposite direction.

On Sunday afternoon soon after CTC reached out to the local guide who was with the trekking group; one of the few who was reachable by phone gave us accurate information on the location of the group. This critical information was immediately shared with the forest department along with participant details and helped in the search and rescue operations. In the evening CTC put together and sent an experienced team to Theni to provide on-ground support.

The recent Kurangani trek was organized as a women’s trek to commemorate women’s day. Arun and Vibin are experienced trekkers who have been trekking across the country for over 7 years. They have competed and won trekking events in other parts of the country. Trained in survival skills themselves, it is hard to accept that they lost their lives in this unfortunate incident. Knowing these experienced trek organizers, we believe they have fought till death to save as many lives as possible. We also came to know that Dhivya Muthukumaran, one of the participants, rescued 3 people and went back to save others, but could not get back. She lost her life in her efforts to save the lives of her team mates.

Chennai Trekking club and its events give courage for women to step out, for a lifestyle of fitness and exploration of nature. This is a platform for women to take on the challenges that only men were allowed to take on. We have lost the best of our trekkers, leaders, volunteers, friends and above all good human beings who cared for other people and the earth. This loss is irreparable. We extend our sincere and heartfelt sadness in what has happened. We extend our full support to the survivors, their families and the families of the victims.

Chennai Trekking Club is a well-established 10-year-old, a group of volunteer-driven, non-profit entity which has inspired tens of thousands of people into an active and healthy lifestyle through hundreds of weekend trekking expeditions and several large annual sports activities. It’s a platform in which like-minded people with full-time jobs, volunteer to come together and experience their shared passion for nature and outdoors. No membership fees are collected and it’s free for all to join.

The group is actively engaged in ongoing environmental initiatives in collaboration with the forest department, planting and maintaining more than 20 thousand saplings in and around Chennai.  Volunteers of CTC were very active during the Chennai floods, rescuing numerous lives and did extensive relief and rehabilitation and organized 300 cleanup drives of the Adyar river post the floods. The group has organized various social initiatives, including 4000 blood donation drives in support of 12 thousand patients, construction of educational and sanitation facilities for the less privileged. The group has a very close affinity to nature with strong adherence to environmental conservation.

There is no organisational hierarchy in any of the activities or events organised by CTC. Each trek is organized by the individual organizer/volunteer based on skills and experience in managing a team. Any trek organized by the club undergoes multiple approvals.  The participants are carefully selected and disclaimers are obtained from all the participants. While starting the trek, it is also ensured that necessary permissions are obtained and the organizers carry the documents with them. The event expenses are shared equally among participants and organisers; and there is no profit made from any trek. Accounts are transparently shared among participants. As in this case, although we followed all the safety procedures and precautions the team was overcome by fire.
We would like to assure all concerned that this is a natural disaster and our experienced trek organizers paid with their lives to stand up for the team. We mourn the death of every CTC and non CTC person struck by this tragedy. And we pray for the speedy recovery for those undergoing medical treatment.