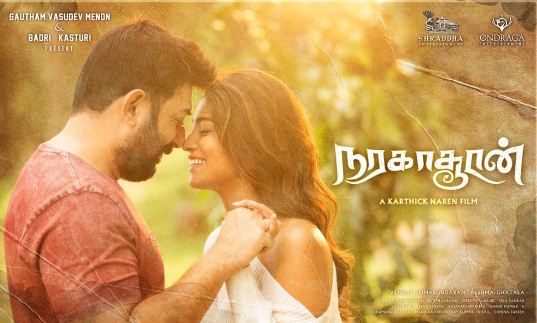 Versatile and much-loved Arvind Swami’s next Tamil movie Naragasooran’s poster is out. Shriya Saran is pairing up with the star in this movie. A new poster of Naragasooran has been released and the two look awesome together! The Roja star’s simple yet stylish avatar gels quite well with Shriya’s charming get-up. There’s no doubt that the two will make a lovely pair in Naragasooran.

Naragasooran, directed by Dhuruvangal Pathinaaru-fame Karthick Naren, is a thriller and its shoot was wrapped up recently, after 41 days. Arvind Swami confirmed the development on Twitter.

A wrap 4 #Naragasooran ! Ty @karthicknaren_M & team! @shriya1109 a pleasure 2 work with U, the screen will be on fire-Geetha and Dhruva ❤️ pic.twitter.com/2Cs45O4THK

Other than Shriya Saran and Aravind Swami, the movie features Indrajith, Sundeep Kishan and Aathmika. Sources say Sundeep Kishan’s part was initially offered to Telugu star Naga Chaitanya but he declined it because of schedule clash.

Embarrassing my director @karthicknaren_M on the sets by rehearsing a romantic scene with him #Naragasooran #funshoot 😂 pic.twitter.com/eylxAEsWio