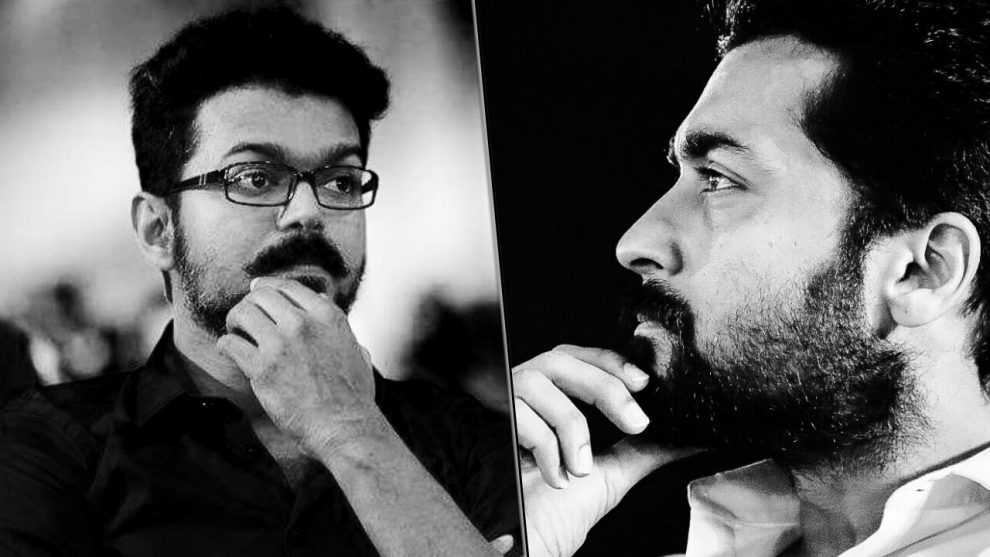 This year’s Diwali is likely to witness a clash like never before. Two big-budget movies starring two major actors are set to lock horns and the Internet is breaking with the tension.

Thalapathy Vijay is working on Thalapathy 62 with Keerthy Suresh, under AR Murugadoss’s direction. Known for his hard-hitting and sensitive movie-making style, AR Murugadoss has been hinting at a Diwali release for Thalapathy 62. Produced by Sun Pictures, AR Rahman is scoring the music for this mammoth production.

AR Murugadoss has been consistently tweeting information related to Thalapathy 62 with the hashtag ‘Happy Deepavali’, suggesting that the movie will release on Diwali. The first look of the yet-to-be-titled movie is set to release this week.

Suriya’s NGK is also set to release this Diwali, say reports. Touted to be a political drama, NGK marks the first time Suriya is working with director Selvaraghavan. The movie also has Sai Pallavi and Rakul Preet with Yuvan Shankar Raja handling the music.

Suriya had almost revealed that NGK will release this Diwali at brother Karthi’s Kadaikutty Singam audio launch. While speaking to the audience, he said “I will meet you all for Diwali.” which can only mean one thing.

The latest to join this bandwagon is director Selvaraghavan. On June 19, he posted an image from the sets of NGK and said “Lights on for a long schedule from today. Lights on for Diwali.  @Suriya_offl #NGKFromDiwali #NGKFire (sic.)”

While the race seems definitely on, fans of both stars have been going haywire on social media. The last time these two stars clashed at the box office was in 2011 with Velayudham and 7am Arivu, both proving to be massive hits. Both their latest movies seem powerful and we’ll just have to wait and see which one reigns supreme. In the meanwhile, we conducted a poll on Twitter and fans of the actors have proved their loyalty yet again. Check out the results here-

It looks like it’s #Suriya v/s #ThalapathyVijay this #Diwali2018.