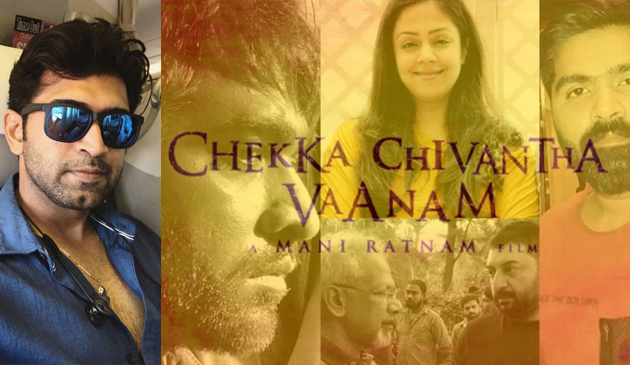 The shooting of director Mani Ratnam’s multi-starrer project Chekka Chivantha Vaanam is progressing at a brisk pace. The latest that we hear is the CCV team is heading to Dubai for the next schedule.

Actor Arun Vijay, who is all excited to join the shoot, took to his Twitter handle to share the news. “Off to Dubai!! My final schedule for #CCV !!,” tweeted Arun Vijay along with this picture.

Starring Vijay Sethupathi, Simbu, Arvind Swami, Arun Vijay, Aishwarya Rajesh, and Jyothika in lead roles, Chekka Chivantha Vaanam has a dream cast and is one of the most anticipated movies of 2018.

Recently, Vijay Sethupathi started shooting his portions for the film and the pictures of the same were viral on social media. It is reported that the team has completed filming Vijay Sethupathi’s talkie portions in the movie on May 6.

On Sunday, actor Arvind Swami too completed shooting his portions for the film. “Just Finished my work in Chekka Chivandha Vaanam. As always it was a privilege to work with Mani Sir, @santoshsivan, and the whole crew. #CCV will be special, can feel it. Now for a days rest and then start promotions for Bhaskar oru Rascal releasing on May11th,” tweeted Arvind Swami.

After last year’s Kaatru Veliyidai, Aditi Hydari is also part of Mani Ratnam’s Chekka Chivantha Vaanam. The movie’s shoot is expected to wrap up by the end of this month.

Touted to be a socio-political drama, Chekka Chivantha Vaanam will throw light on issues like industrial Pollution and much more. Produced by Madras Talkies and Lyca Productions, the movie will have music by AR Rahman.

Watch out this space for more updates!

Rajini Selvi – Jyothika to act as Rajini fan in her next?
Nivetha Pethuraj issues a strong statement over FAKE photos
Comment