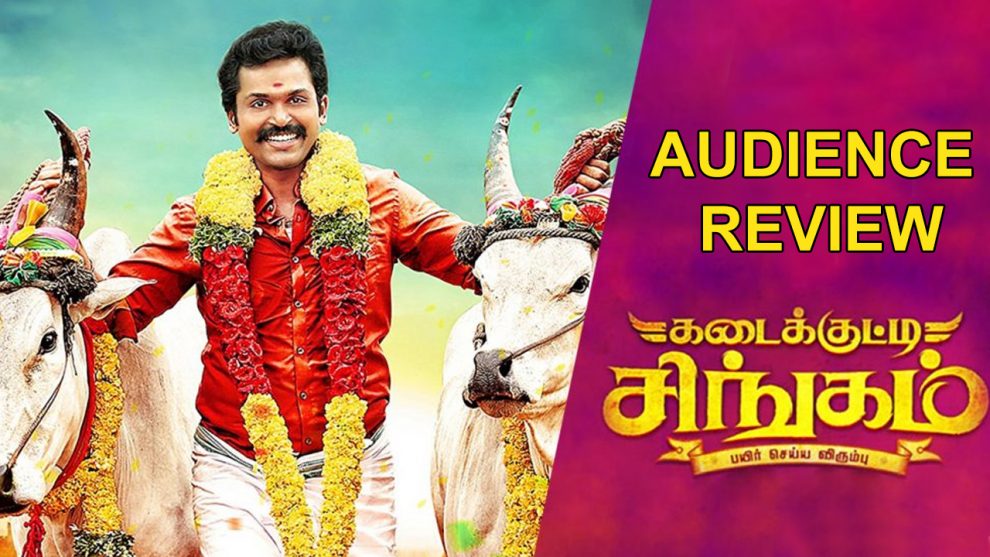 Actor Karthi’s rural entertainer Kadaikutty Singam hit theatres on July 13,  and has opened to positive responses from critics and public.

Starring Sayyeshaa in the female lead, this pandiraj directorial revolves around a young farmer, played by Karthi. Sathyaraj appears as Karthi’s father in the movie which is bankrolled by Suriya’s production banned 2D Entertainment. Music is by Imman.

It’s been ages since a movie moved me so much! The drama was too good…that you would want to watch with your whole family again!! @pandiraj_dir  Super work team… #KadaikuttySingam

#KadaikuttySingam : A lovely film that emphasises the importance of farming , family bonding , affection ! Loved the way @Karthi_Offl has performed in the movie. @sooriofficial ‘s comedy timing too was good . @sayyeshaa was pretty good . . Cameo by @Suriya_offl ( A good watch )

#KadaiKuttySingam is a crisp family drama, which is rarely made in Tamil cinema these days. @pandiraj_dir has treaded a difficult path with ease. Brother-sister bonding is well said. @Karthi_Offl holds the movie together @Suriya_offl

#KadaikuttySingam – If you lived/living in a Joint family, if u lived / living in a small town with all your cousins – You will cry atleast once during the second half. But -Not all are impressed with the sentiment, most are !! An agmark family entertainer after a long long time!

#KadaikuttySingam [3.25/5] : @pandiraj_dir has taken a subject (Family relationships/Farming) which is forgotten in Tamil industry.. His dialogues are sharp.. Nice to see dialogues about farmers getting applause.. Managing such a vast cast is a big deal.. He has delivered it!

#KadaikuttySingam 1st half – Don’t go in late. The initial part of the film is a big highlight. @Suriya_offl marks a charming presence in a cameo, appearing along with brother @Karthi_Offl and his #ReklaRace winning bulls..

#Kadaikuttysingam 1st half – @pandiraj_dir keeps it lively and engaging in the scenes when the large family is introduced. @Karthi_Offl looks Gethu and is perfect as the proud farmer. Soori provides steady comedy support. @immancomposer is another hero with ‘Vaa Jikki’ & the BGMs

#KadaikuttySingam [3.25/5] : @Suriya_offl ‘s cameo is the icing on the cake.. More than his cameo, it takes lot of guts to produce a movie like #KKS which is about family relationship and farming in this day and age.. Respect to #Suriya for that..  Go and Watch it!

#KadaikuttySingam [3.25/5] : After a long time, a feel-good rural family entertainer, that talks about upholding family relationship and farming.. @Karthi_Offl is the lifeline of the movie.. Despite being a big action hero, kudos to him for choosing a script about family/farmers

#Kadaikuttysingam -After Theeran, it’s a huge changeover for @Karthi_Offl. It’s selfless of him to share the frame with countless other noted actors. When he talks about the pride of being a farmer and the future of farming, it connects well, due to his clean image. @pandiraj_dir

#Kadaikuttysingam 2nd half – Lots of drama & emotionally heavy scenes. Has one big melodramatic stretch in the end. It’s a film catered to the family audiences. Those with a large family and from a rural background will relate to it more. @Karthi_offl leads the cast majestically