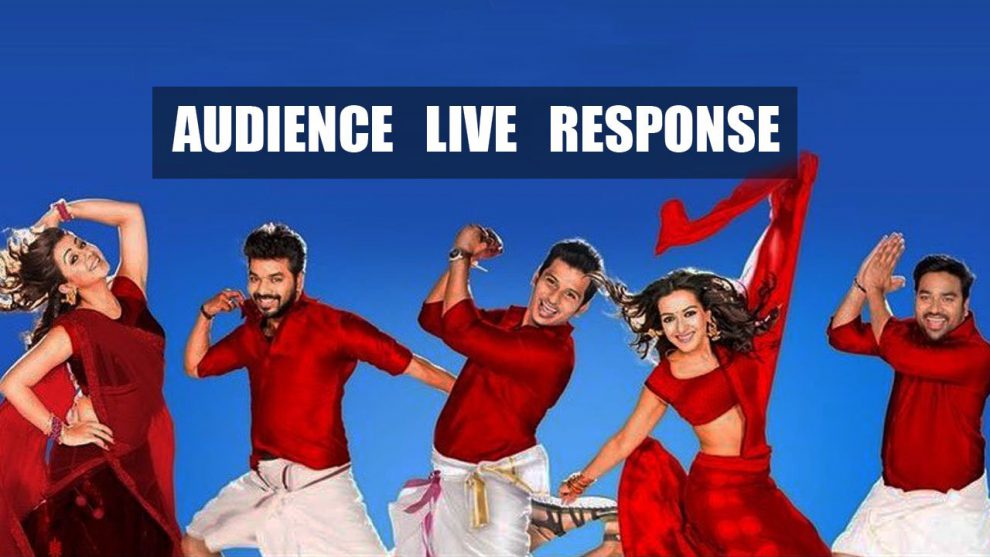 Kalakalappu 2 is one movie that needs no introduction. Featuring an ensemble star cast, Sundar C has created a laugh riot and a celebration of sorts with this movie. The movie released today and wishes have been pouring in for the cast and crew on social media. Along with wishes, the one other thing that has been trending is reviews and responses to the movie.

As is expected, the movie proves to be a thorough entertainer and many of the cast members have been receiving compliments.Check out some of the responses to the movie.

#Kalakalappu2 . Completed!!! Fun ride!!! If you like sundar. C template ..it won’t disappoint you. Second half stands high with yogibabu and siva one liner. Loved it. Book the tickets with your family and enjoy it. Stress relief movie. Will work all centres. (2/2)

#Kalakalappu2: Lengthy runtime of close to 3 hours, but you won’t feel the bite if you’re game for such a film. Both the songs and the fights have comedy infused nicely.

#Kalakalappu2: Jiiva and Jai piggyback on a plethora of comedians led by @iYogiBabu, @actorsathish, @iamrobosankar and more. But the show-stealer is Shiva, who despite coming in only halfway, rocks the party.
#Kalakalappu2 review @YogiBabu_offl dominates 2nd half..👏🏻👏🏻👏🏻👏🏻 laugh riot 😀😀😀 as usual dir_sundarC, good entertaining movie 🍿 @Actor_Jai @Actorjiiva @actorsathish @khushsundar @hiphoptamizha kudos to all cast and crew 👌🏻
#Kalakalappu2 – 1st half – Below average so far. Except for tiny little comedies at times, nothing worked out. Heavy drag thanks to the needless songs and mindless double meaning comedy dialogues. Onus on @actorshiva to uplift the film who made a rousing entry at the interval.
#Kalakalappu2 super report. Hope it will ends 2018’s first #hit #Kollywood
#Kalakalappu2 (Tamil) – Interval – Comedy works in parts with situation and double meaning humor. Script is convincing, nice to see whole lot of talented artists with peppy BGM. (1/2) @khushsundar @Actorjiiva @Actor_Jai @actorshiva @hiphoptamizha @nikkigalrani #SundarC
#Kalakalappu2 (Tamil) – Interval – On the other side, no logic, too slow with songs as speedbreakers and some boring cinematic moments are also present. Break point (Shiva’s intro) is enjoyable, so awaiting for the 2nd half. ‘Okay’ so far. (2/2)
#Kalakalappu2 laughter roit and a perfect entertainer for this weekend #SundarC knows exactly the pulse of audiences and has presented the movie well. With good performances from @nikkigalrani @Actorjiiva @Actor_Jai
#Kalakalappu2 – @actorshiva turns the tables in the second half that makes us overlook the negatives in earlier half. @iYogiBabu, @iamrobosankar, Munishkanth and co make the audience burst in laughter in certain scenes. Watchable – Above Average(2.75/5)
As these guys said.. A laugh laughh laughh riott from sundar c sir and co.. A rib ticklingg fun filled movie.. watch outt the real kondatam in theatres 😍😂😂#Kalakalappu2 #Kalakalappu2 review @hiphoptamizha @Actorjiiva @nikkigalrani @AvniGroups @actorsathish @manobalam
As promised, #SundarC delivers a rollicking comedy entertainer.. loosen up, forget all tensions and go watch this fun ride #Kalakalappu2 @Actorjiiva @Actor_Jai @actorshiva @hiphoptamizha @CatherineTresa1 @nikkigalrani @AvniGroups @khushsundar
TagsCatherine Tresa Jai Jiiva Kalakalappu 1 Kalakalappu 2 Khushbu Sundar Nikki Galrani Robo Shankar Sathish Shiva Sundar C VTV Ganesh