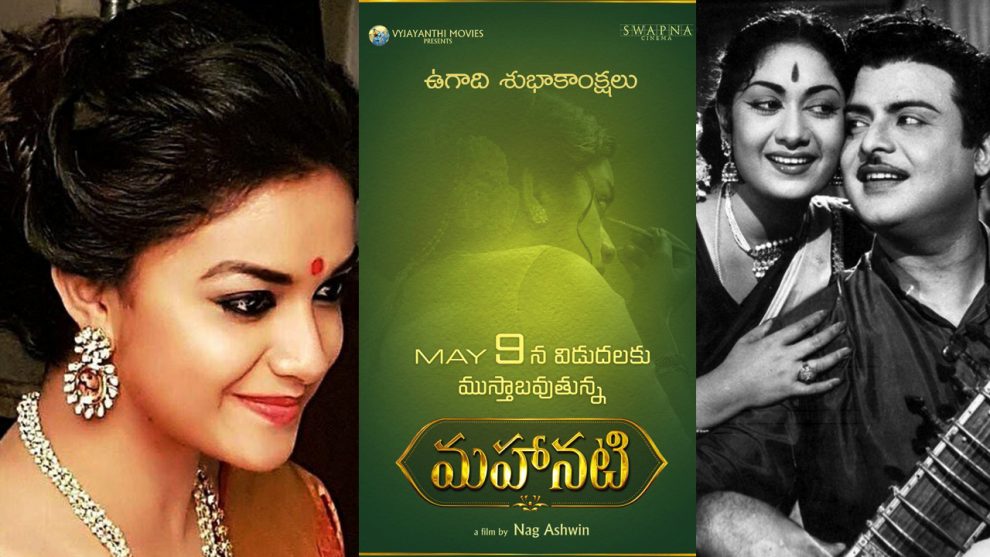 On Sunday, the makers of Mahanati officially announced that the project will hit theatres on May 9.  “The greatest story ever told about the greatest actress that ever lived unfolds on May 9th! Wishing everyone a very Happy Ugadi,” tweeted Vyjayanthi movies.

On the occasion of  Women’s day, the makers of the upcoming bi-lingual Mahanati unveiled a special teaser of the movie, which is a biopic on veteran actress Savitri. The 1 minute 3 seconds teaser gave a glimpse of Savitri’s life journey, without revealing the looks of the title character played by Keerthy Suresh.

The film’s leading lady, Keerthy Suresh took to her Twitter page to share the happy news, along with an official poster. “Watch out for this classic!  An Epic tale from @nagashwin7 and team!,” tweeted Keerthy Suresh.

The movie which brings together South India’s most loved heartthrobs – Dulquer Salmaan, Keerthy Suresh, Samantha Akkineni and Vijay Devarakonda – is being made in Tamil as Nadigayar Thilagam.

Recently, an unofficial poster of the movie featuring the lead pair – Keerthy Suresh and Dulquer Salmaan – surfaced on social media and went viral. While it was initially rumoured to be a leaked picture, later it came to light that it was a fanmade poster.

While Keerthy Suresh plays the legendary actress Savitri, Dulquer Salmaan appears as Gemini Ganesan, who was Savitri’s husband. Mahanati also has Samantha Akkineni in an important role. Directed by Nag Ashwin, the movie is produced by the prestigious banner Vyjayanthi Movies.

Actor Keerthy Suresh, one of the most sought-after heroines of Kollywood, also has Saamy Square, Sandakozhi 2 and Thalapathy 62 in her kitty. All the projects are expected to hit big screens this year.

“With the stardom to superstardom in direction” says S.J Suryah
“A brother who was like a father”, Kamal’s tribute to Chandrahasan
Comment