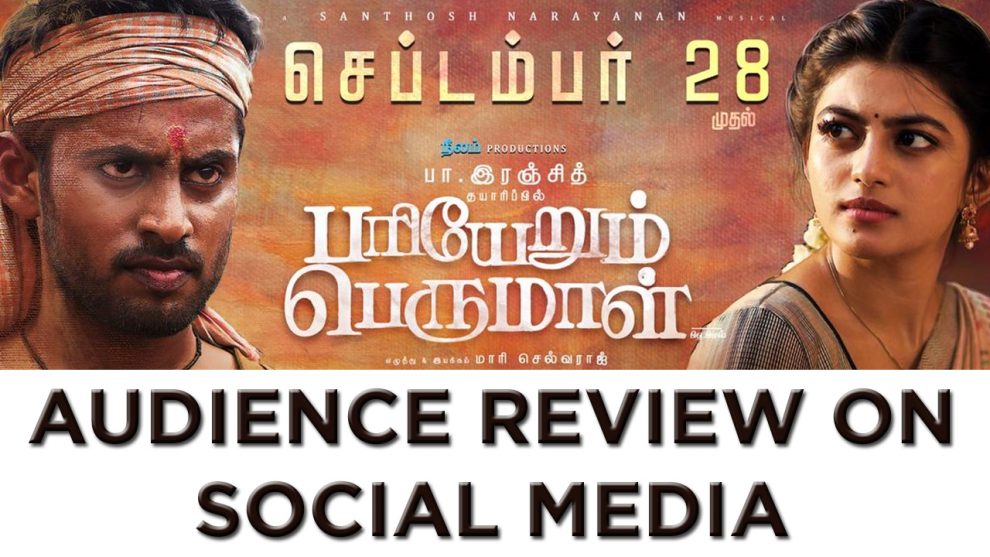 Directed by debutant filmmaker Mari Selvaraj, the movie is based on caste discrimination and the sufferings of the oppressed. The movie also features a dog, that plays an important character named Karuppi. As you know, the film also has a song titled ‘Karuppi’, dedicated to the dog.

The movie is making news for all the right reasons. Impressing audience and critics alike with its hard-hitting subject, the movie has also left celebrities in awe!

Here’s what the audience has to say about Pariyerum Perumaal

Vignesh Shivn – In our life we get to a see a lot of films.. we enjoy some , we cherish some , we dislike some ! But only very few films live wit us, Makes us ponder about it! This masterpiece from @mari_selvaraj is one such film that is sure to take a place in all our hearts & history too. @beemji for producing this film Ranjith should be proud of himself and continue to do this!! Mari’s matured writing, looking at an issue which has never left our dirty brains has been filmed wit utmost sincerity and honesty! Unbiased and from a neutral POV,Brilliant. Inspiring musical treatment givn by @Music_Santhosh who has an unique way of creating a surreal mood for a realistic rendition! This team has to strike gold in the box office,people shd make this film an unforgettable one&Giv a respectable place in the history of Tamil cinema. @am_kathir has given a lifetime performance ! U cant find him act anywhere ! Has jus lived #PariyerumPerumal BABL as an actor u have completed your masters no more – maela Oru koodu @iYogiBabu has given a complete performance! @anandhiactress & the entire crew’s lifetime best

Pushkar & Gayatri – #PariyerumPerumal is all heart!! @mari_selvaraj is a revelation as a writer-director! He keeps surprising us with HOPE! @am_kathir brings the character to life with a nuanced performance! @Music_Santhosh is dripping soul! Perfect launch of @officialneelam. Big cheers to @beemji

Siddharth – Kathir, Anandhi, Yogi Babu, Karuppi and the whole cast; DOP Sridhar, maestro @Music_Santhosh producer Ranjith and the whole crew of #PariyerumPerumal…Thank you so much. I haven’t felt this much emotion after a film in a long time. Mari Selvaraj and team will be celebrated!

#PariyerumPerumal One word Brilliant. Just go for it for its Brilliant Film Making and the content. One of the best Social Thriller. It willl keep u engaged right from the 1st scene. Congratulations @am_kathir Gonna take u places. @beemji anna Best Debut Production.

The voice of the oppressed gets heard in the most hard-hitting fashion in @beemji produced and Mari Selvaraj directed #PariyerumPerumal, which is easily the most accessible and thought provoking film in this space. It moved me to tears. @am_kathir delivers a knockout performance.

#PariyerumPerumal [4/5]: A hard-hitting movie, that emotionally moves u from within.. A movie that stays with u for a long time, even after u leave the theater.. About the injustice of caste discrimination.. Set in Tirunelveli-Tuticorin belt.. Law College Backdrop.. Powerful..

#PariyerumPerumal [4/5]: @Music_Santhosh ‘s music is the lifeline of the movie.. Songs are so integral to the movie.. Makes u emotionally connect.. DOP #Sridhar captures the village landscape well..

#PariyerumPerumal [4/5]: @am_kathir delivers a nuanced performance.. Certainly a Milestone movie for him.. @anandhiactress has a memorable role for her.. Very natural performance.. @iYogiBabu – Not only does comedy, but also has a good supporting role..

#PariyerumPerumal 4/5. Brilliant. A little gem on the caste cauldron in south TN from Dir @mari_selvaraj, handled it sensitively without being preachy backed by a solid realistic performance by @am_kathir as a Dalit youth ably supported by @anandhiactress, #Shanmugarajan & others

#PariyerumPerumal is part of history now! Under the category, best films ever made, this is to be added!