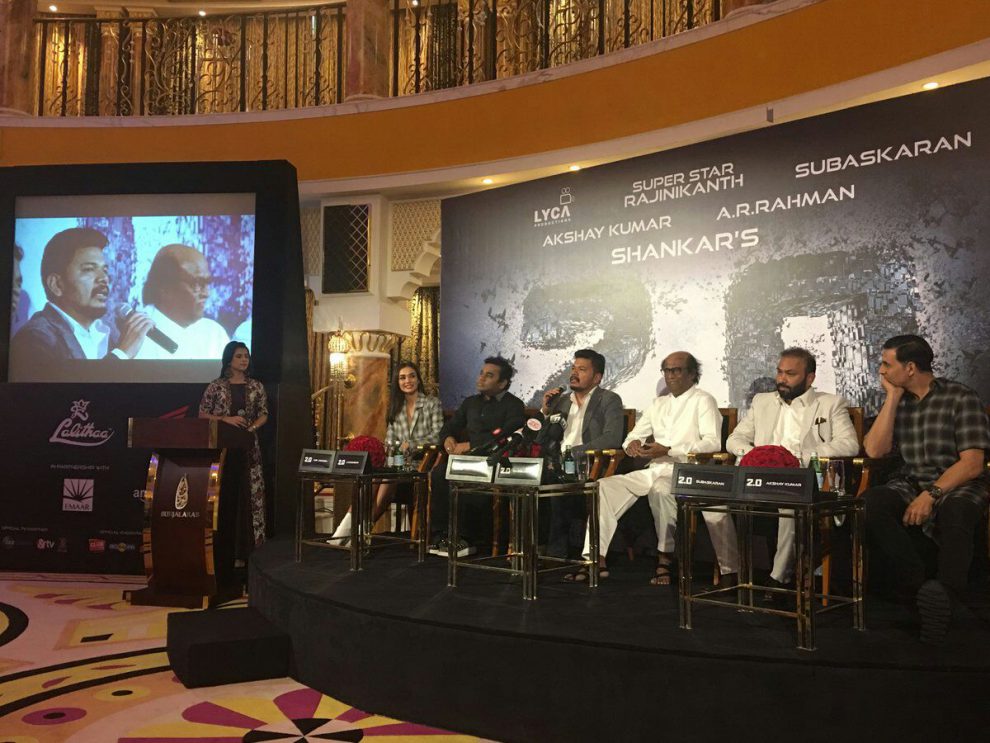 After Baahubali, it’s the turn of 2.O to showcase the grandeur of Indian cinema.

The film is directed by Shankar and stars superstar Rajinikanth, Bollywood actor Akshay kumar, and the beautiful Amy Jackson.

The music for the film is composed by A.R. Rahman.

On Thursday, the team held a press meet ahead of the most-anticipated audio launch.

‘I don’t get paid to act in real life’

“The movie will definitely be a ‘mass film’ which will make the people of India proud,” Rajinikanth said. However, the most interesting part of the event came when a reporter posed a question to the actor, asking “Why are you so simple, sir?”

To this the star replied, “I am not acting in my real life because I am not getting paid for that.”

2.O not a sequel to Enthiran

“2.O is like a Hollywood movie but I did not copy from there. The film is for everyone, not just for the Tamil audience. We tried to rope in Arnold in the movie but we couldn’t.”

Talking about the story, he said, “It is definitely not a sequel to Enthiran. This film is completely different from that. This is more like a 3D film.”

Continuing from where the director left, Akshay elaborated, “My role is so different in the movie. I have not portrayed such a character in my acting career. It’s not a villain character but it will be a combination of negative shades.”

He jokingly added, “We took nearly 3.5 hours to put make up for the role and took 1.5 hours to wash it off.”

Finally it was the turn of the music director. “This film has 3 songs. Two songs will be released on October 27 and the remaining one will be released soon after that. There will be multiple background scores.”

Here are the details of the audio launch event.

The film’s worldwide premiere is scheduled for January 25, 2018 and is expected to be released in 15 languages.