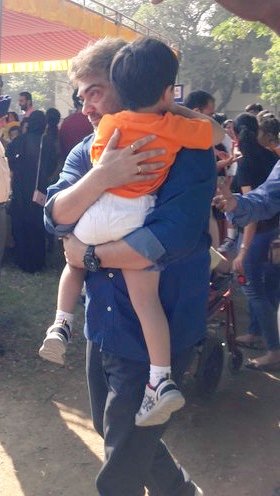 As reported earlier, actor Ajith is sporting a brand new avatar in his upcoming movie Viswasam directed by Siva. Much to the delight of the actor’s fans, his new look has leaked online and in no time the pictures have taken social media by storm. Sporting a new hairdo with surprising hair color, Ajith looks dashing and suave as ever. Looks like Ajith has finally bid a goodbye to his usual salt-and-pepper style.

While one section of Ajith’s fans is going gaga over his new look, many others are celebrating the latest pictures of the actor’s son Aadvik, who is fondly called as ‘Kutty Thala’. In the leaked pictures, we can see the little champ actively participating in a school sports event.

Fans of Ajith are treating the adorable star kid with all love. Ever since Aadvik was born, fans have been giving warm reception to his photos by setting a trend on social media.

Celebrity couple Ajith and Shalini welcomed their second kid Aadvik on 2 March, 2015. Their first child Anoushka was born in 2008.

Thala is prepping up for Viswasam, his fourth film with director Siva. The team has launched the project with a small pooja on December 7.

Rajinikanth Birthday: First surprise is from actor Arya’s team
Thaana Serndha Koottam teaser will be out on November 30
Comment