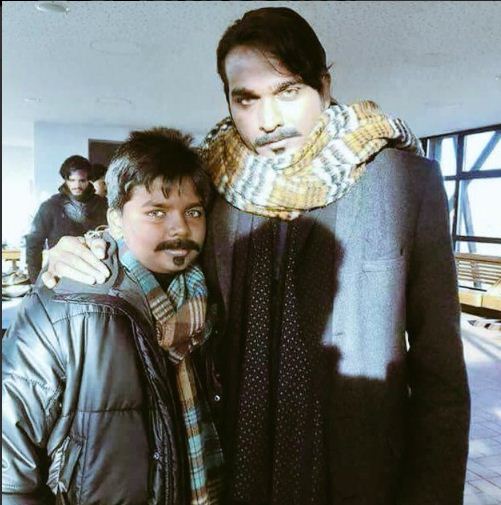 One of the busiest actors in Kollywood Vijay Sethupathi has bag of films in his kitty. It is believed that the actor must have acted more films than any other star last year.

Vijay Sethupathi is currently working for Junga in France. And, there was a pleasant surprise for us.

Sethupathi’s son Surya was also seen in the sets of Junga with different get-up. The son-dad duo had a beard and a mustache.

Makkal Selvan is pairing up with Vanamagan-fame Sayeeshaa Saigal. Photos from the sets reveal that the actor is donning a different role, one that he has never done before.

Surya is not new to acting. The boy has played a role, that of the childhood version of Vijay Sethupathi in Naanum Rowdy Thaan, directed by Vignesh Shivan.

Recently, the actor posted a picture of him and his son on Twitter. But it’s unclear whether Surya plays a cameo or if the picture was a casual one. The movie is being bankrolled by Vijay Sethupathi’s own production house.

The actress has been sharing photographs of the shooting in Paris on Twitter.

It is reported that the next schedule of Junga shooting will be in Chennai and the other heroine, Priya Bhavani Shankar, and other members of the cast will join.

‘Sketch’ will give you relationship goals: Vijay Chander
‘Don’t judge me by ‘Yemaali’ teaser’
Comment