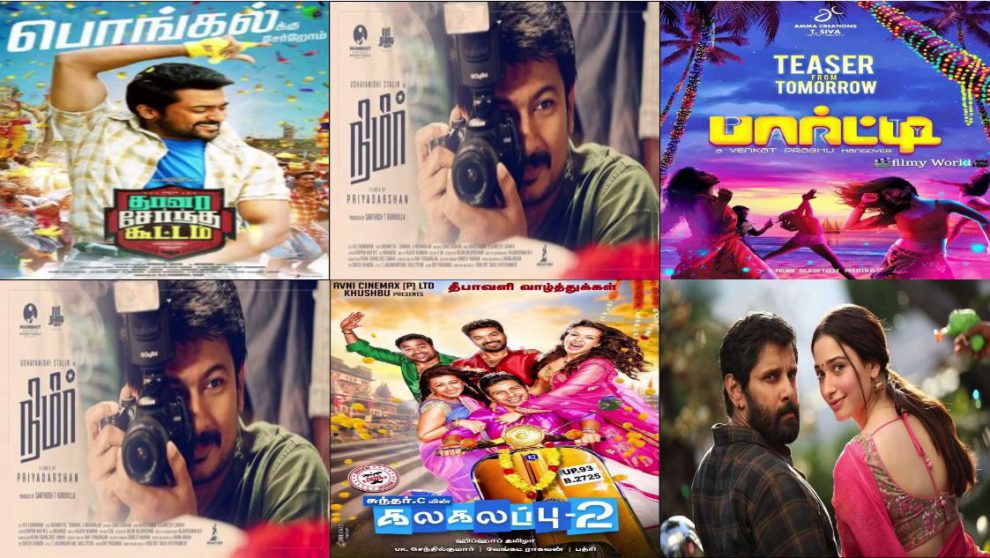 First up is Thaana Serndha Kootam, starring Suriya and Keerthy Suresh in lead roles, directed by Vignesh Shivan. It also has renowned actors such as Karthik, Ramya Krishnan and Bramhanandam playing important roles. The movie is being released in Telugu as GANG and is scheduled for a worldwide release for Thai Pongal.

Sketch, directed by ‎Vijay Chander and featuring Vikram and Tamannaah in the lead, is also eyeing a Pongal release. Production for Sketch started in February 2017 and Chiyaan Vikram had been working on both Sketch and Dhruva Natchathiram simultaneously. Actor Tamannah was roped in after actor Sai Pallavi opted out of the film. Talking about the film, Tamannah was recorded saying it was “liberating to see a strong storyline in a commercial pot-boiler”.

Following the success of Kalakalappu, director Sundar C is all set to release its franchise – Kalakalappu 2—for Pongal 2018. The film has an ensemble star cast including Jiiva, Jai, Shiva, Nikki Galrani and Catherine Teresa. Actor Vaiyapuri was roped in for the second schedule of the film and this marks his first on-screen appearance after his stint on the reality TV show Big Boss.

Featuring Arvind Swami and Amala Paul in the lead, Bhaskar Oru Rascal is a remake of the Malayalam film, Bhaskar the Rascal and is being written and directed by Siddique. Following the success of the movie in Malayalam, Siddique decided to make it in Tamil as well. Popular stars that were approached for the film initially include Rajinikanth, Ajith Kumar, Nayanthara and Sonakshi Sinha.

Actor Vishal has both produced and played the lead role in Irumbu Thirai, along with Samantha. Directed by P.S. Mithran, the movie initially had actor Arya playing the antagonist. He later opted out of the film saying he wasn’t ready to play a negative role and actor Arjun was roped in to replace him.

Tik Tik Tik directed by Shakti Soundar Rajan, is a science fiction movie, being said to be India’s first space thriller. The film has Jayam Ravi, Aaron Aziz and Nivetha Pethuraj in the lead and the teaser of the movie was released on August 15, 2017. Interestingly, the movie is set for release on January 26, 2018 (Republic Day). The film’s music has been scored by D. Imman, with YogiB, Yuvan Shankar Raja, and Sunitha Sarathy lending their voices for the title track.

Bhaagamathie, a thriller film directed by G. Ashok, is set to be released in 3 languages – Tamil, Telugu, and Malayalam is set to release in January. It has Anushka Shetty playing the titular role and has Unni Mukundan, Jayaram, and Aadhi Pinisetty playing supporting roles. According to reports, Anushka had to shed nearly 18 kilos for her role in the movie. This movie also marks actor Jayaram’s debut in Telugu.

Being dubbed as a Venkat Prabhu hangover, Party is a star-studded film that has Premgi Amaran scoring the music. The first look of the film had alcohol bottles displaying the names of the lead actors. Jai, Shaam, Shiva, Sathyaraj, Jayaram, Nassar, Regina Cassandra, Sanchita Shetty, Nivetha Pethuraj and Ramya Krishnan are among the actors in the film.

Nimir, an upcoming film starring Udhayanidhi Stalin in the lead under Priyadarshan’s direction, is a remake of the Malayalam film Maheshinte Prathikaaram. It also has Namitha Pramod and Parvatii Nair and has music by Darbuka Siva and B. Ajaneesh Loknath.

Saamy 2 is an action film and a sequel to the super-hit movie Saamy directed by Hari. While Saamy featured Vikram and Trisha in the lead, Saamy 2 has Vikram and Keerthy Suresh playing the lead roles. Trisha, who was initially a part of the film, opted out of it in October 2017, citing creative differences.

Actors Prabhu Deva and Hansika Motwani are paired for the first time in Gulaebhagavali, to be released in January. Directed by Kalyaan S, the film also has actor Revathi in a supporting role. Interestingly, it was Prabhu Deva who launched Hansika in Tamil with his movie Engeyum Kadhal. The first Gulaebhagavali was released in 1935 and the second Gulaebhagavali in 1955. The latest film has a flashback connecting both the older ones.

Imaikkaa Nodigal is an upcoming thriller film directed by R. Ajay Gnanamuthu starring Nayanthara and Atharvaa in lead roles. Nayanthara plays Atharvaa’s elder sister in the film. For the role of the antagonist, Prabhu Deva, Gautham Menon, and Anurag Kashyap were considered and Kashyap was finalized.

Actor Pandiaraj dons the hat of the producer with the upcoming comedy-drama Semma, under the direction of Valliganth, featuring G.V. Prakash, Arthana Binu and Jana. The film is said to be based on a real-life incident that happened at the wedding of a friend of the director. Pandiaraj even termed the movie a ‘full-length comedy.’

Termed as the ‘spiritual successor’ to the first movie, Sathuranga Vettai 2 is a thriller starring Arvind Swami and Trisha in the lead and has been directed by N. V. Nirmal Kumar. Along with them, the film has Prakash Raj, Daniel Balaji, and Nassar in important roles. According to reports, certain portions of the film were shot in Penang and is now ready for release.

Dhruva Natchathiram, starring Vikram, Aishwarya Rajesh and Ritu Varma in the lead, has been written and directed by Gautham Menon. Initially, actor Suriya was supposed to play the lead in the movie. He opted out of the film citing creative differences. The film has been shot in exotic locations and is slated for release in April 2018.

Kaali is Kiruthiga Udhayanidhi’s second directorial the 2013 superhit Vanakkam Chennai. The shooting of the film, which stars Sunaina, Anjali, Amritha and Shilpa Manjunath alongside Vijay Antony, is progressing at a brisk pace. The movie is expected to be a summer release.

Following the success of his first venture Dhuruvangal Pathinaaru, director Karthick Naren is all set to release his next film-  Naragasooran. The film features Arvind Swami, Shriya Saran, Sundeep Kishan and Indrajith in lead roles and is being produced by Gautham Menon. The film was shot in 41 days and the director even tweeted saying “#Naragasooran is the second installment of the thriller trilogy which I would like to make & it belongs to the same universe of #D16”.

From the looks of it, 2018 has got its hands full and will leave the audience spoilt for choice.