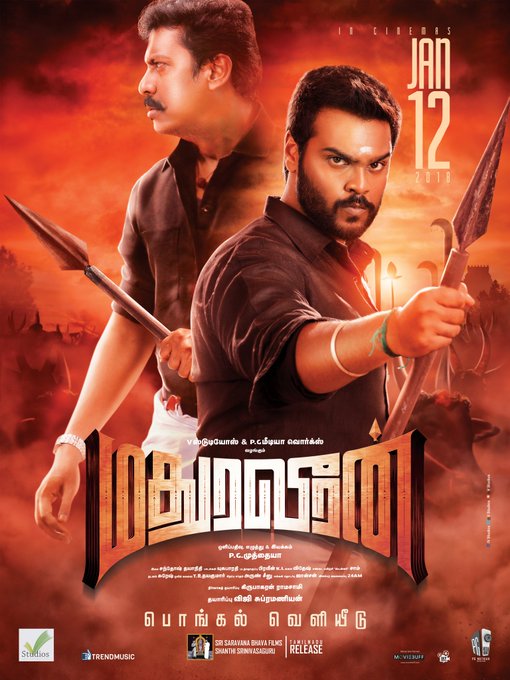 Pongal is the biggest season to release films in Tamil Nadu. The year 2018 is no different. There are five films vying for theatre space this Pongal.

Actor-politician Vijayakanth has confirmed that his son Shanmugapandian’s movie Maduraveeran will also be a Pongal release. Directed by PG Muthiah, Maduraveeran features Meenakshi in the female lead, along with Samuthirakani, Mime Gopi, Rajendran and many others in the supporting cast.

Maduraveeran’s music is by Santhosh Dhayanidhi and editing by Praveen KL. The movie is locking horns with 4 highly-anticipated movies.

Suriya’s Thaana Serndha Kotam directed by Vignesh Shivn will hit theatres on Pongal weekend. The Telugu version of the ‘gang teaser’ was released last day, and had set the social media on fire. For the first time actor Suriya had dubbed for himself in Telugu.

To all the lovely Telugu people 😇😇

Sunder C directorial Kalakalappu 2 is the other film that will hit theatres on Pongal 2018. As the prequel Kalakalappu was a fun-filled comedy entertainer, fans have pinned their hopes on the upcoming movie too.

Vikram, Tamannaah Bhatia-starrer ‘Sketch’ is also prepping up for a Pongal release. Directed by Vijay Chandar, the movie is touted to be an action entertainer.

Kollywood calendar 2018: 17 movies to watch out for in the first trimester
An important announcement from ‘Yemaali’ team
Comment