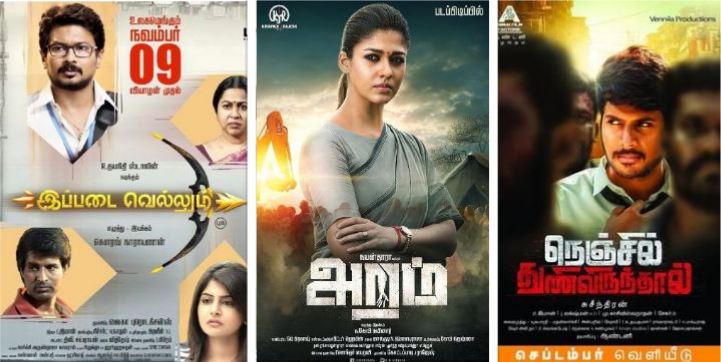 The coming weekend promises a lot of fun for Kollywood fans, as Ippadai Vellum, Aramm, and Nenjil Thunivirundhal are set to hit the screens. Here’s a quick look at what’s in store:

The movie will be release on Nov.9. Directed by Gaurav Narayanan, Ippadai Vellum (U/A) is produced by Subaskaran.

The action-comedy film has Udhayanidhi Stalin, Manjima Mohan in lead roles. Others in the film include Radhika, Soori, Daniel Balaji and R.K. Suresh.

Shot in Chennai, Hyderabad, Bengaluru, Pondicherry and Oman, Ippadai Vellum’s music is composed by D. Imman. The voice-over in the trailer has been given by actor Vijay Sethupathi.

“Stalin plays Madhusoodhan, a software professional, who believes that brains can do the trick when it comes to solving any issue,” said the director in a recent interview.

The movie is expected to be released on Nov. 10. Nenjil Thunivirundhal is a bilingual action drama film written and directed by Suseendran.

The movie is shot in Tamil and Telugu and features Vikranth, Sundeep Kishan, Mehreen, Soori and Appukuty in lead roles.  Harish Uthaman’s role has a negative shade in the movie.

Nenjil Thunivirundhal’s plot revolves around friendship between a group of people with a social message.

Aramm in the direction of Gopinainar is set to be released on Nov. 10,

Social-Drama film Aramm features Nayanthara in lead role as a district collector. Nayanthara plays the role of Madhivadhani, with Ramesh and Viggnesh of Kakka Muttai fame in supporting roles.

The music is composed by Ghibran M.

Madhivadhani fights for the people who are struck between corridors of power, politicians and problems revolving around agriculture, water scarcity.

The female-oriented film is expected to set the box-office on fire.

The producer of Aramm, Kotapadi J Rajesh, says, “The film is socially relevant and is based on a real-life incident, but it is more of thriller. Nayanthara is there in every frame and we are riding on her box-office power to bring in the family audiences.”