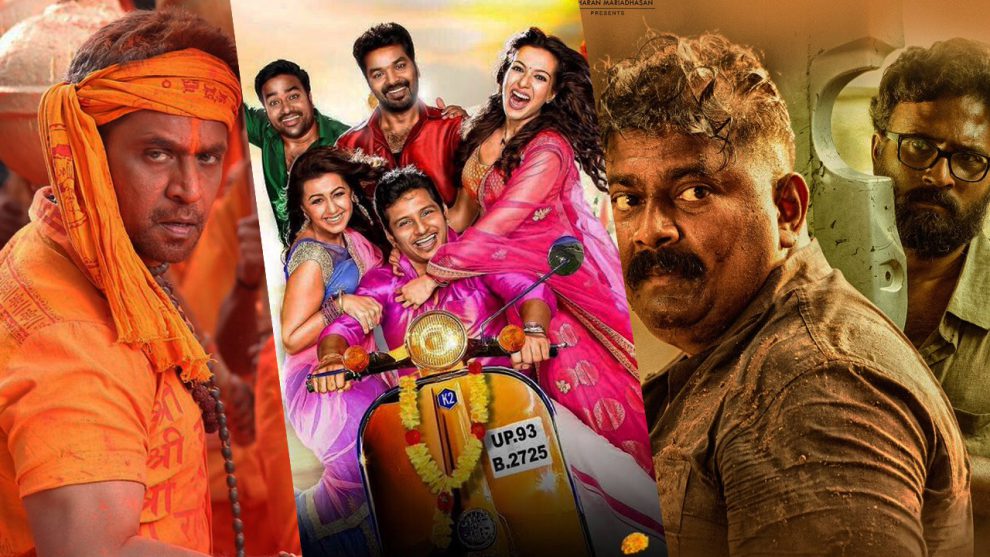 It’s almost weekend and with it comes a list of films to look forward to. In Kollywood, four films are making their way to the big screens this Friday. Have a look at the list here –

The movie is a sequel to Kalakalappu,  which was released in 2012. The prequel had Shiva, Vemal, Santhanam, Oviya, and Anjali in the lead. As the movie was widely acclaimed as a family entertainer, the sequel has created quite a hype among the audience.

Produced by Khushbu, the movie is certified with a U/A certificate. Music is by Hiphop Tamizha and editing by N.B. Srikanth. Pre-booking for the laugh-riot is in full swing.

Actor Arjun’s bi-lingual directorial Sollividava aka Prema Baraha features his daughter Aishwarya Arjun and Kannada actor Chandan Kumar in lead roles. The movie is touted to be a love story set in the backdrop of a war.

Apart from directing and producing the film, Arjun will also be appearing in a cameo role. Sollividava is Arjun’s 12th directorial while this is Aishwarya’s second film after Pattatha Yaanai released in 2013.

From the looks of the trailers and posters, the movie gives an impression of an action thriller. However, the Savarakathi team, in an exclusive interview with us, revealed that the movie will be an out-and-out comedy entertainer.

Produced by Mysskin’s Lone Wolf Productions, the movie’s music is composed by Arrol Corelli. As Mysskin and Ram have already carved a niche for themselves as acclaimed directors, movie-buffs are eagerly waiting to see their first-time onscreen combo.

Touted to be an action thriller, Narivettai is directed by Akash Sudhakar. Starring Akash Sudhakar and  Mahalakshmi in lead roles, Narivettai has music by Charles Dhana. Produced under the banner Channel Akash Studio, Narivettai will lock horns with the much-anticipated movies – Kalakalapu 2, Savarakathi and Sollividava.

Meanwhile, the much-hyped Bollywood flick Padman starring Akshay Kumar, Radhika Apte, and Sonam Kapoor is also hitting big screens on February 9. Directed by R Balki, the movie is inspired by the life of an entrepreneur Arunachalam Muruganantham who invented the revolutionary low-cost sanitary pad making machine. The movie has created a nation-wide hype with its ‘padman challenge’, that was promoted by celebs and audience alike on social media.

On February 10, the romantic entertainer Tholi Prema starring Varun Tej and Raashi Khanna is releasing in Tollywood amidst huge expectations. Directed by Venky Atluri, the movie is one of the most-anticipated movies among Tamil audience as well.

In Mollywood, Manju Warrier’s controversial movie Aami directed by Kamal is hitting theatres this Friday. The movie is a biopic on the life of renowned writer Kamala Das. The movie opened to controversies ever since it was announced. After a long battle, it is finally releasing on February 9. Aami also features Maari 2 actor Tovino Thomas, Murali Gopy and Anoop Menon in pivotal roles.

So, which movie is your pick for the weekend?

Pyaar Prema Kaadhal: a surprise from the team is coming your way!
An important update on Superstar Rajinikanth’s Kaala
Comment