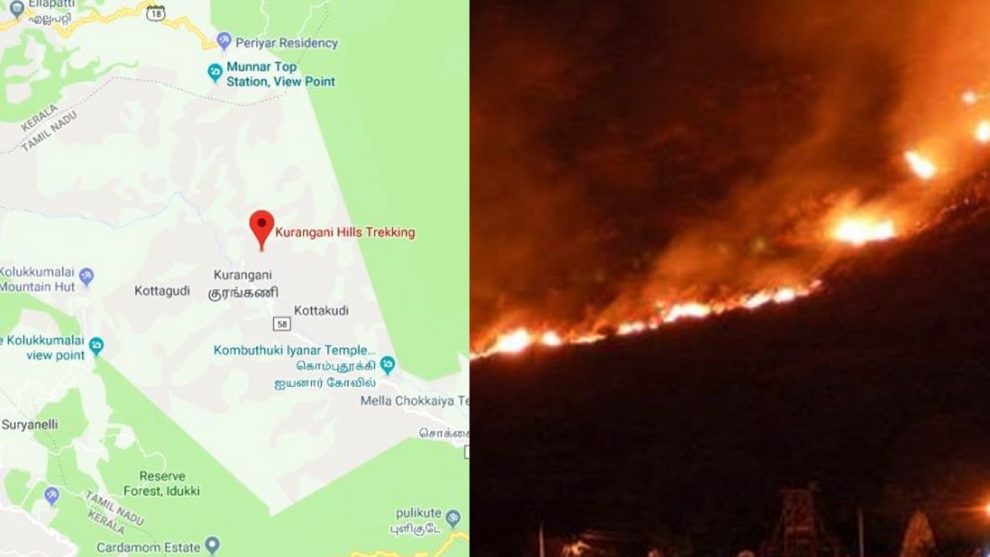 A group of about 36 trekkers, including college students, families and children, were trapped in a forest fire in Kurangani forest, in Theni district of Tamil Nadu on Sunday. The group was trapped in the fire as they were trekking down to Bodinayakkanur via the Korangani area.

“Responding to the request from the Hon @CMOTamilNadu on the forest-fire related issue — 20 students are caught in Kurangani, Theni district. Instructed @IAF_MCC to help in rescue and evacuation. The Southern Command is in touch with the Collector of Theni,” tweeted Defence Minister Nirmala Sitharaman on Sunday.

After night-long rescue operations, 27 trekkers who were stuck on the hill have been rescued.  On Monday morning, Tamil Nadu state government confirmed the death of 9 members – 5 women and 4 men. Among the dead, six were from Chennai and three from Erode, local police said. Many who have suffered burns in the fire are being hospitalized in Theni and Madurai districts.

“#TheniFire – In a coordinated Search & Rescue effort, the Indian Air Force has rescued and brought back 27 of the 36 trapped students. The mortal remains of 9 students, who were unfortunately deceased in the #TheniFire have also been brought back by the @IAF_MCC . @nsitharaman”, tweeted Defence Minister Nirmala Sitharaman on Monday.

According to reports, 16 commandos of Garud Commando Force and 4 helicopters from the IAF, with one of them at standby, have reached the Kurangani forest and is carrying out search and rescue operation since Monday morning.

It is reported that there have been forest fires in the area for the past 10 days and the team headed for the trekking without permission from the forest department, which does not allow trekking anywhere along the ghats.

According to a tweet made by Defence Minister Nirmala Sitharaman, 4 helicopters of the IAF and their 10 commandos are involved in the rescue operation.

Kerala wildlife sanctuaries to shut down

According to fresh reports, forest minister K Raju has announced that the Kerala Government has decided to shut down all the wildlife sanctuaries temporarily, as a precautionary measure after the Theni forest fire accident.

As per the recent update, the rescue operations in the forest have been called off, while there are three more trekkers to be traced out.